Why is the UK doing so well?

The UK equity market is having a good start to the year, at least compared to some of the bigger international markets. This week we take a look at why.

It should not need repeating that the UK stock market is not a reflection of its domestic economy. This is true of most of the major indices with the exception, perhaps, of Japan. The larger indices now comprise mostly large international companies which happen to have originated in a particular country and still be listed there.

An exception is the banks sector, which is largely domestically orientated in most markets. However, the performance of bank companies’ shares is very correlated to interest rates and bond yields, making them heavily correlated to each other across regions in any case.

It follows that the UK’s recent strong relative performance is a consequence of industry mix, rather than investors having any particular view on the outlook for the UK economy. Indeed, domestically oriented UK stocks, such as retailers, have been poor performers. This reflects the squeeze consumers are experiencing from inflation in energy and other basic needs, despite some wage inflation.

The real weakness in markets has been in the high growth and high valuation areas, such as technology, as interest rate rises begin to bite. The growth versus value debate is very heavily entwined with the interest rate outlook. Rising bond yields are bad for long duration growth stocks and vice versa. The UK has a paucity of growth stocks, especially in the tech arena, compared to most other indices.

On the other side of the coin, the current year has seen strong performance from areas such as financials, energy and materials. Energy for example, is less than 4% of the global index, but BP and Shell alone are over 10% of the UK benchmark. The same is true for mining and banks. Performance of these areas is heavily intertwined with the growth versus value debate, which itself is heavily impacted by the inflation outlook.

It follows that whether the UK continues to outperform other global markets very much comes down to whether inflation persists, for how long and at what level. This is probably the most important question facing financial markets this year.

It is reasonable to suggest that the current very high levels of inflation are unlikely to persist, if only because base effects will mean comparisons become easier as time goes on. However, in our view the coming years will likely see inflation become higher and remain more persistent than the trends of recent years. This comes down to a number of factors, including government spending, deglobalisation, ESG policies and the re-emergence of the global consumer following a decade of deleveraging.

If that proves to be the case, we expect those sectors that are so important to the UK market to continue to outperform over coming years. Also, in a more inflationary environment, bond yields are likely to be on a rising trend, crimping the performance of growth sectors. In contrast, the earnings and valuations of inflation-beneficiary areas will be seen as attractive, following many years of underperformance.

FTSE 100 Index versus MSCI World Index. The UK has potentially a long way to go to catch up with other markets. 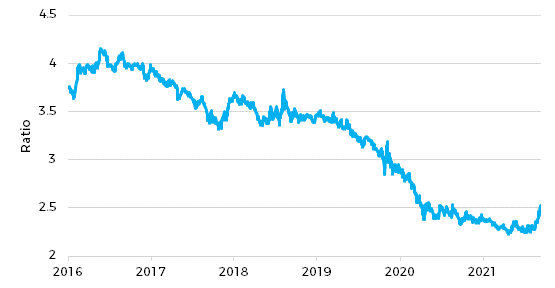 We don’t look at regional weights to the degree that most other mixed asset managers do, we consider sectors and themes much more important than regions. However, as a consequence of the shift towards inflation-friendly areas, away from the full-on growth themes of recent years, our UK weight has risen materially over recent months, to levels not seen in recent years.

The value of stock market investments will fluctuate, and investors may not get back the original amount invested. Reference to any particular stock does not constitute a recommendation to buy or sell the stock.

Government and corporate bonds generally offer a fixed level of interest to investors, so their value can be affected by changes in interest rates. When central bank interest rates fall, investors may be prepared to pay more for bonds and bond prices tend to rise. If interest rates rise, bonds may be less valuable to investors and their prices can fall.