What does the second half hold for markets?

As we end the first half of 2022, financial markets have turned in some material losses. Few assets were spared, which has challenged the static 60/40 equity/bond approach to portfolio construction.

The main driver of markets has been inflation, which proved more persistent than markets expected, and this in turn led to central banks becoming belatedly more hawkish. More recently, this has driven concerns that economies will move into recession.

That is the broad macroeconomic picture but the forthcoming second quarter corporate profits season will no doubt fill in some of the blanks left by this top down perspective. A key focus will be input costs, especially the degree of wage rises, and the extent to which companies can pass on any higher costs.

These tensions are also being played out through rising levels of industrial disputes that, whilst nowhere near 1970s levels (see graph below), are causing central bankers, and politicians, some concern, and not just in the UK. 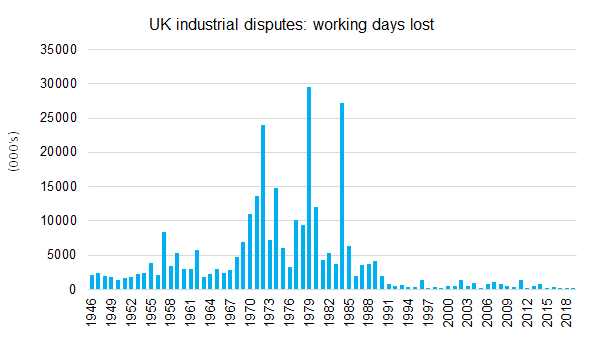 Looking forward to the second half of this year and beyond, we believe inflation will continue to be the major driver of financial assets. Even though the market’s focus is currently the timing and severity of recession, reflected in the US yield curve inverting and a much weaker copper price, recession concerns tie back to the degree to which monetary policy tightens which, in turn, is driven by the inflation data.

In terms of the central banks’ response, markets are currently expecting US rates to peak early in 2023, at around 3.3%, while UK rates are priced in to peak slightly later on in 2023, at around 2.9%. What if Fed hawkishness has peaked and the Fed achieve the illusive soft landing? This would likely be positive for asset markets but will new leadership emerge, or will tech take the baton again?

It’s too early to say too much about market dynamics on the other side, as it very much depends on the nature of the inflation-growth dynamic and whether central bank credibility remains intact, but what does seem clear is that economies are increasingly moving to their own drumbeat and we think this is increasingly likely as de-globalisation takes hold. For example, different stages of the economic and rate cycle, take the UK and China as extremes.

Reduced synchronisation also means more potential diversification opportunities for investors. In the meantime, we remain cautious across assets, with a low equity weight, a reduced exposure to cyclicals and elevated cash.

Commodity prices can fall and rise sharply depending on supply and demand, the economic background and financial market conditions. Exposure will never be direct to any commodity.

Share this article
Twitter
LinkedIn
PrevPreviousThings can only get…?
NextDoes the crypto crash matter more than we think?Next