We have been saying for some time that higher food and energy prices have a number of implications beyond their immediate economic impact, including increasing de-globalisation, resource nationalism and political risk.

There have been a growing number of anecdotes to support this but, increasingly, hard data is coming through too, particularly in relation to political risk. Specifically, there have been three resignations by political leaders in recent weeks, all from very different countries, but with a common theme.

We saw the Sri Lankan president resign recently, amidst charges of corruption but with the cost of living a key trigger for his departure. In the UK, Boris Johnson also resigned for a number of reasons, but the cost of living and the related and growing number of industrial disputes fed a sense that the government was losing control.

Most recently, Mario Draghi (aka Super Mario) has tried to resign as Italian prime minister although his credibility remains intact and the resignation has been less straightforward. Italian politics is infamous for weak coalitions breaking up: they have had 132 governments in 161 years (an average of 15 months). Nevertheless, surging food and energy costs have an important part to play in the latest political instability.

Higher inflation is also feeding through to higher interest rates, which is further exposing more fragile economies, especially as many countries have higher debt levels now, due to managing Covid lockdowns. For example, higher bond yields are leading to a widening spread between Italian and German government bonds, as illustrated in the chart below. This is also feeding into higher political risk.

The spread between Italian and German 10-year government bond yields 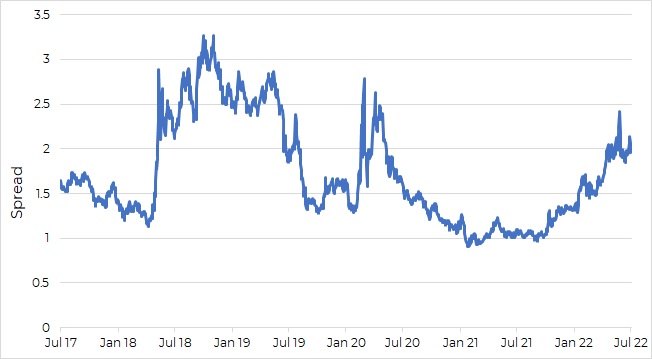 We must stress, as with the Arab Spring, it’s not just about food and energy inflation. There are of course always pre-existing issues, but these are often compounded by inflation in non-discretionary items. Especially so in countries where food and energy are a higher proportion of consumer spending, where savings are low and where government ability to ease the pain is limited. Particularly at risk are emerging markets which are consumers, rather than producers, of commodities.

Inflation might well have peaked near term but if it remains elevated that will continue to be painful for the electorate. All this is coming hot on the tails of the Covid lockdowns, which saw psychological suffering, as well as many who suffered economically. Consequently, many electorates are at the end of their tether.

Ironically, at a time when political strength is needed, genuine leaders are scarce and electorates are impatient. Central banks meanwhile, independent or otherwise, feel the political pressure to tackle inflation, generally by raising rates. As a result, some economies are caught in between a rock and a hard place. Other countries we believe are vulnerable to these external shocks include Argentina, Turkey and Pakistan, to mention a few.

From a broader market perspective, these risks have been contained so far. The risk is of growing debt defaults and contagion. The probability of this occurring will be decided by how high commodity prices, interest rates and the stronger US dollar go, and for how long.

The performance information presented in this insight note relates to the past. Past performance is not a reliable indicator of future returns.

Whilst every effort has been made to ensure the accuracy of the information contained within this document, we regret that we cannot accept responsibility for any omissions or errors. The information given and opinions expressed are subject to change and should not be interpreted as investment advice. Reference to any particular stock does not constitute a recommendation to buy or sell the stock.

Persons who do not have professional experience in matters relating to investments should not rely on the content of this document.

Share this article
Twitter
LinkedIn
PrevPreviousDoes the crypto crash matter more than we think?
NextThe rock in the pondNext