Thinking ahead of the curve: New trend, new thinking required.

In this insight note, Emma Mogford, manager of the Premier Miton Monthly Income fund and Optimum Income funds, explores whether a trend from the 1980’s is going out of fashion and tackles the question; what next for markets?

I believe we could be at a major turning point in markets. This trend change could take investors away from the backdrop of falling interest rates, which they have become accustomed to over the last 30 years, and to a new world. One where ‘old fashioned’ investing in cheap companies that generate cash profits today, rather than those that promise profits in the future, will be key. Now is the time to review client portfolios, as what worked in the last decade may not work in the next decade.

Between 1989 and 2020, US ten-year bond yields were broadly on a downward trend. With bond yields at historical lows, US market valuations reached extreme highs in January 2022. The risk at this market peak was that equity markets would suffer if US bond yields rose significantly and rapidly, as all else being equal, higher yields erode the present (todays’) value of future company earnings and drive out lower stock market valuations. If interest rates and bond yields can’t fall further, if the era of cheap money is coming to an end, what might that mean? 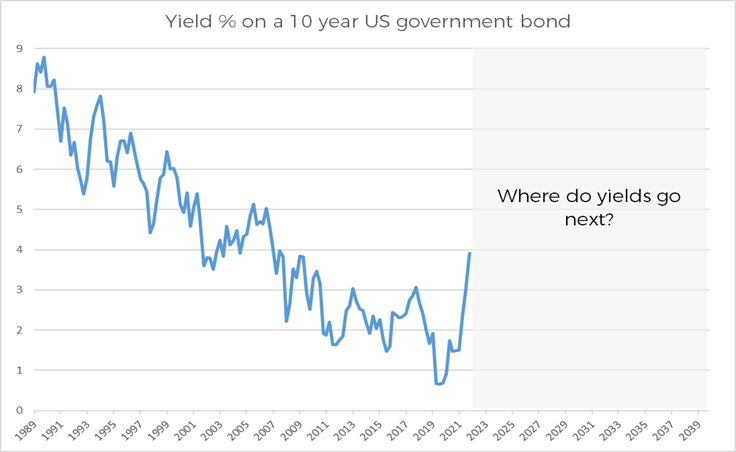 Why an inflection point, why now?
In 2019, I believed central banks were losing faith in their ability to generate inflation using quantitative easing. They had however driven very significant inflation in asset prices – from bonds and equities to property prices and private company valuations. The rising wealth inequality that this created drove increasing pressure on politicians for change.

Governments would need a recession or ‘shock’ to turn to significant central government spending. That shock came in the form of the Covid-19 pandemic, just a year later, and we saw unprecedented financial stimulus across the world. The fiscal cat had been let out of the proverbial spending bag. Funding taps have been opened by central government for everything from income support, energy subsidies, defence spending to tax cuts. Inflation was coming and interest rates would have to rise in response.

The art of the possible
Thinking about the future is an exercise in probability, as there are many different possible outcomes. It strikes me that there are increasing reasons to believe that the most likely outcome is one where interest rates do not fall for the next decade, as they did for the last, and therefore our investment choices should consider this context.

The case for inflation to fall in the next year or so is reasonable. As interest rates rise and covid stimulus cheques get spent, so demand for goods falls; the price of many raw ingredients in food and industrial metals has already started to fall. Supply chain blockages caused by Covid are easing. A good indicator of this is that freight rates, the cost to ship goods across the world, are falling.

Grounding this article firmly in reality, we don’t yet know what the impact of the rapid coordinated interest rate increases will be. It is often said that the full impact of an interest rate change is felt 12 months after the event, so there is a real possibility the world is tipped into a sizeable recession which would no doubt bring down inflation.

It is the world we find ourselves in after the next 12 months which concerns me. There are a few structural reasons why I believe that inflation will come to settle above 2% for much of the next decade. The most important is an increase in trade tensions, in particular between China and the West, which may reverse some of the deflationary impacts that greater globalisation brought. This comes at a time when the shock of Covid means companies are investing more in securing supply to have ‘just in case’ inventory rather than ‘just in time’ inventory.

Other reasons include the need to rapidly transition to a green economy which will close fossil fuel powered energy generation and manufacturing before the end of its useful economic life; the need to invest in climate resilience in the face of increasingly frequent extreme weather events; and greater government intervention in capital markets, which has in the past led to lower productivity and higher inflation.

What might this mean for investors
I believe now is an important time for investors to consider their holdings, with the possible change in investment backdrop from consistently falling interest rates to a period of modest interest rates. This trend change is likely to mean that what performed well in the last decade may not necessarily perform well in the next decade.

I believe it is imperative to focus on companies which generate good cash profits and pay reasonable dividends. In a world where returns are harder to come by, dividend income will be an increasingly important component of total return.

A world with more normal levels of base interest rates could also see more volatility. Falling interest rates drove asset prices in one direction, up. In the absence of that, we could see more frequent business cycles and less correlation between different sectors of the economy.

Indeed, in the past we have had recessions much more frequently, but the gap between the global financial crisis in 2008 and the covid crisis in 2020 was 12 years and it could have been longer without the pandemic shock.

The importance of natural income
Today many investors rely on selling units within investment funds to generate income which supplements their earnings or pension. However, if markets are more volatile there will be more risk of selling units during a market trough and missing out on the subsequent rise in value. We believe this will favour natural income, by which I mean investing in an income focused fund which generates an income from dividends. Although the income may vary, it allows the investor to keep the same number of units through the market cycles.

In the Premier Miton Monthly Income Fund, all our holdings offer a dividend yield that we think is attractive. We blend these together so that the historic dividend yield on the fund today is 4.8% (as at 30.09.22, class C income shares). The historic yield reflects distributions declared over the past twelve months as a percentage of the fund prices as at the date shown. It does not include any preliminary charge and investors may be subject to tax on their distributions.

We could also see greater volatility in currencies as differences in fiscal policies around the World drive different rates of inflation, requiring different interest rates and movements in currencies, as it was in the days before globally coordinated monetary policy. Not all investors will be comfortable with a higher level of volatility which could see many come back to investing in their home currency, UK sterling.

Against a challenging backdrop of higher inflation, higher interest rates and more political intervention, we remain confident that the approach we use in managing the Premier Miton Monthly Income Fund is the right one. Our focus on ‘quality at a reasonable price’ means that we believe the companies in which the fund invests, have good pricing power in the face of rising inflation; the potential for resilient earnings facing a volatile economic outlook, but also the fundamentals to flourish as this new economic trend unfolds.

The performance information presented on this page relates to the past. Past performance is not a reliable indicator of future returns.

The level of income paid by the fund may fluctuate and is not guaranteed.

Government and corporate bonds generally offer a fixed level of interest to investors, so their value can be affected by changes in interest rates. When central bank interest rates fall, investors may be prepared to pay more for bonds and bond prices tend to rise. If interest rates rise, bonds may be less valuable to investors and their prices can fall.
This fund may experience high volatility due to the composition of the portfolio or the portfolio management techniques used.

In certain market conditions companies may reduce or even suspend paying dividends until conditions improve. This will impact the level of income distributed by the Fund.

Whilst every effort has been made to ensure the accuracy of the information contained within this document, we regret that we cannot accept responsibility for any omissions or errors. The information given and opinions expressed are subject to change and should not be interpreted as investment advice. Reference to any particular stock or investment does not constitute a recommendation to buy or sell the stock / investment.

Are we there yet? A bend in the road for European Equities?

Inflation may be peaking in the US, but will likely remain damaging

Share this article
Twitter
LinkedIn
Email
PrevPreviousEveryone’s a winner: Inside the US inflation reduction act
NextTactics to wrestle a 400lb gorillaNext