On some levels, for example militarily, the Russia/Ukraine conflict has been relatively contained. Indeed, even though, geographically, it has been one of the closest conflicts to European political headquarters for some time, and Russia’s end game remains unclear, there seems little discussion about the conflict spreading beyond Ukraine’s borders.

In contrast, the non-military implications are being felt globally, for example through immigration, sanctions and financial markets. In financial markets, there has been little broad based risk contagion. Instead, the transmission mechanism has been through commodity prices, reflecting concerns around the supply of certain commodities, for example oil and gas, and wheat. These are adding to inflationary pressures that were already building, due to previously tight supply dynamics.

Energy and food are normally excluded from core inflation measures because they tend to be quite volatile and can distort more general inflationary pressures. At the same time, energy and food are unique in that they are necessary for basic living and, as a result, inflation in these areas is more powerful in its effects.

Governments are very aware of the relationship between these types of price rises and civil unrest, especially in low income countries where the proportion of a household’s income spent on food is materially higher. The chart below shows a previous spike in food prices in 2007/8, which caused the “World Food Crisis” that saw food riots across numerous low income countries in virtually every continent, while the spike in 2010/11, especially in important wheat, were big drivers of the “Arab Spring”. These two previous crises put the current massive surge in food prices in context. 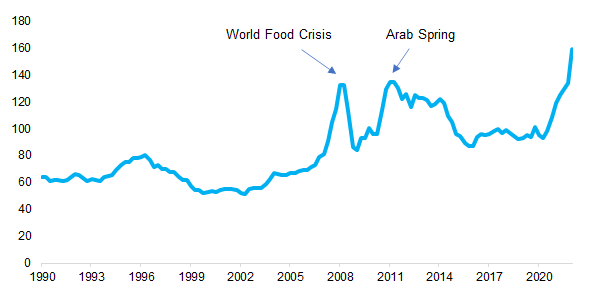 There are of course other factors at work in some of these countries, many of them long standing, such as corruption, but a spike in food prices is often the trigger for pressuring, and regularly replacing, political regimes. There are also longer term dynamics that have pushed food prices higher, such as the conversion of corn into ethanol, encouraged by subsidies, more volatile weather patterns and increased meat production, which in turn requires more cereals for animal feed. Energy costs are relevant here too, as they are an important input into the production and transportation of agricultural output.

The effects of this recent inflation dynamic is being felt far and wide right now. Take recent events in Sri Lanka as an example. The economy had already been weakened due to the negative impact of Covid lockdowns on the important tourism sector. A shortage of imports has been adding to existing inflation, which looks to be surging beyond 20%, and the currency has weakened significantly, with foreign reserves dwindling. As a result, the central bank has raised rates significantly.

The worst economic crisis since independence in 1948 has led to weeks of protests, specifically due to fuel and food shortages, and there have been wide spread resignations from the cabinet, as well as the central bank governor. This week has seen formal talks start with the IMF for a bailout.

Why zoom in on a small country that is a small part of the equity and debt indices and, in terms of our investment universe, doesn’t pass our liquidity screens? As we argued in last week’s Perspectives, we believe there are opportunities in emerging markets but being selective is key. Sri Lanka is a timely example, but not the only example, of the pressures many low income countries are under.

From an investment perspective, we remain selective in investments generally, especially emerging markets, and we retain our “agricultural” theme which looks to benefit from the changes in the agricultural backdrop outlined above.

Commodity prices can fall and rise sharply depending on supply and demand, the economic background and financial market conditions. Exposure will never be direct to any commodity.