Can markets cope with rates any higher?

While focus in the UK has been on to what degree the recent mini budget and its subsequent reversal have been driven by financial market signals, it is clear that much larger forces are at play. Bond yields globally have been moving higher in lockstep, as inflation has remained stubborn, and US Fed Funds Rate has been raised.

This massive move higher has begun to cause stress in economies and financial markets around the world. Close to home we have seen the tension in UK pension funds, which have been enthusiastic users of LDI (liability driven investment), a leveraged form of a 60/40 investment portfolio approach.

As the saying goes, however, there is never only one cockroach. A decade of low and falling bond yields and the negative correlation that arose between bonds and equities, has given rise to aggressive risk taking under the guise of risk management. 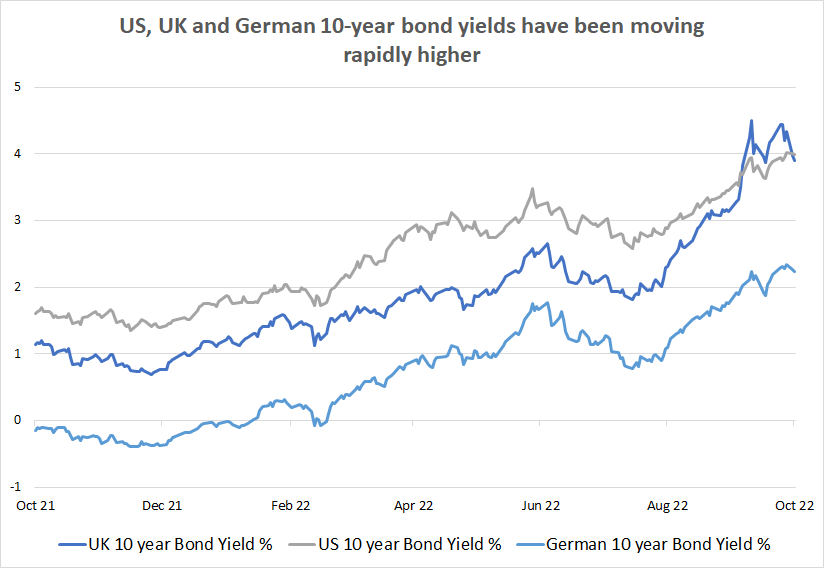 In the near term, the move higher in UK yields and its subsequent partial reversal was possibly caused by forced selling rather than the mini budget. The UK pension funds received margin calls on their derivative based LDI strategies and the Bank of England had to intervene to avoid a catastrophe. The underlying problem remains.

Far too many investors have based their long-term investment strategy on a false premise, that equities (and other growth assets) will always be negatively correlated with government bonds. More specifically bonds of longer duration.

Rather than a period of more typical credit driven market stress, we are now in the midst of a bear market in longer duration bonds. No doubt other pensions funds in Europe and the USA, which were also keen users of LDI are also suffering greatly, as will other large institutional investors and hedge funds.

When leveraged investors lose money in one asset class they become sellers across their other assets, leading to a knock-on effect. This is particularly so when that asset class is the supposedly low-risk asset which is typically used as collateral to support the whole portfolio structure.

Unfortunately, the rise in interest rates is now also having a knock-on effect on the real economy, which was already suffering from the impact of higher inflation. The impact of higher borrowing costs is having a significant negative impact on the housing market in the US and will no doubt impact on the UK in due course. This important sector is a key indicator of the wider economy, in both the US and UK house purchases and building drive so much of employment and consumption.

While we don’t think that the UK pension crisis is sufficient to drive a rethink of the Fed’s policy of tightening rates aggressively to tame inflation, it is certainly evidence that we are getting towards the point in the tightening cycle when something breaks. We obviously hope that nothing serious fractures, but hope is not a strategy. It seems clear that the global financial system cannot really cope with much higher rates.

If and when something more serious goes wrong the Fed will act to ease. That should mark the start of a new cycle, most likely one that includes yield curve control. This will signal a light at the end of the current tunnel.  We remain ready to rebuild equity positions and have recently been tentatively buying good quality corporate bonds, constructing portfolios that remain highly liquid and conservative.

The performance information presented on this page relates to the past. Past performance is not a reliable indicator of future returns.

Government and corporate bonds generally offer a fixed level of interest to investors, so their value can be affected by changes in interest rates. When central bank interest rates fall, investors may be prepared to pay more for bonds and bond prices tend to rise. If interest rates rise, bonds may be less valuable to investors and their prices can fall.

The share price of companies (Equities) can experience high levels of price fluctuation.

Persons who do not have professional experience in matters relating to investments should not rely on the content of this document.

Are we there yet? A bend in the road for European Equities?

Inflation may be peaking in the US, but will likely remain damaging